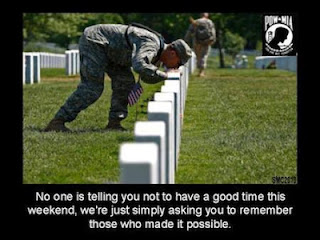 In particular, I am remembering two members of my family from 'the greatest generation', my grandfather, Edgar Craig, who served in the US Marines during the Battle of Iwo Jima, among other places in the Pacific theatre. He died in 2000. Also, my grandmother, Frances Duncan, who served as an army nurse in Europe and lost a kidney in service. She died in 1993. They are sorely missed. A third grandparent, Allan Madison Broadbent, served during World War II, and died in 1984. I never knew him, unfortunately. There were estrangement issues in the family.
Posted by Eilir at 11:31