Yesterday, among other things, I repotted or side-dressed every pot on our back porch with fresh potting soil, putting the tomatoes and a few others into bigger pots.
Normally I wouldn't do that while they are blooming/putting on fruit, but the big tomatoes were shrivelling up in the sun easily and there was a smaller pot of tomatoes that just weren't doing well. (These were all cherry tomatoes from a friend at work.) Plus, I had a couple of new dwarf tomatoes plants from another friend that I put in slightly larger pots, and I put the olive trees in a bigger pot.
I was very tired and I got covered in soil, which is bad when you are in a cast and can't take a shower, so I had to do my best in the sink. My roommate doesn't understand why I was so hot--he basks in 90 degrees. I did wait until the last part of the day, but still, it was very hot! Here are some before and after pictures: 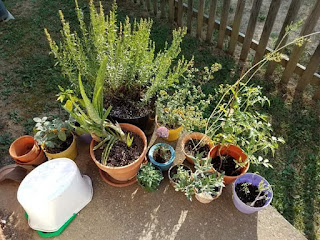 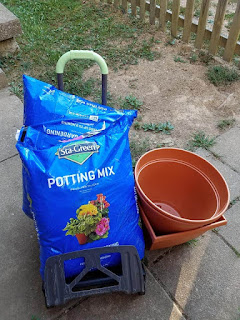 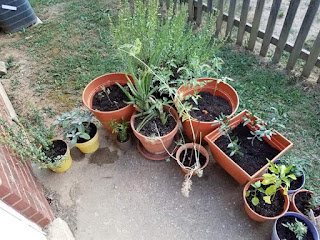 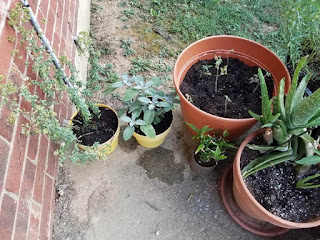 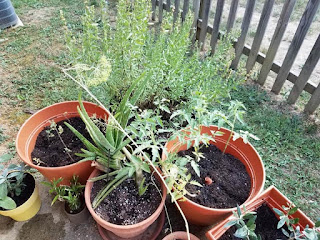 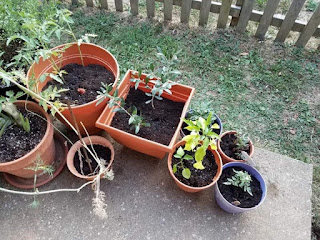 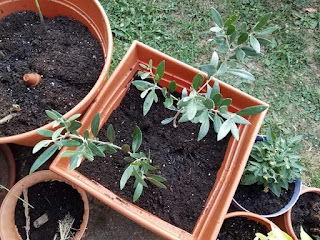 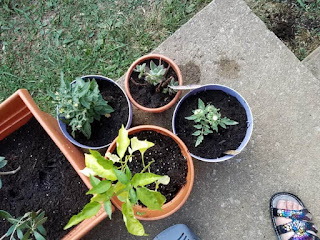 Jalapeño, dwarf tomatoes, and red velvet echevaria
Posted by Eilir at 10:44 No comments:

I was feeling better, and so earlier this week I dispensed with the boot and just wrapped my foot, and I did pretty well, not hurting any more than it did in the boot.  I had an MRI on Monday, and got the results on Friday.
So by the time I went to the appointment on Friday, I actually showed up in sandals without having even wrapping my foot.  This was not a good idea, and the doctor was not pleased. Now, in my defence, he didn't think there was going to be much on the MRI to be concerned with when he ordered the MRI.  And my foot and ankle was feeling much better.
However, his first words to me when he came in was that the MRI had shown all sorts of problems.  I do have arthritis midfoot and some mild plantar fasciitis, but the more worrisome issue was the ligament status.  Several were terribly sprained and one was actually kind of lax.  So...I have to be in the boot, probably for about five weeks, to make sure the ligaments do not become any more damagaed, and certainly I don't want to tear anything completely.  This was not the information I wanted to hear.  Even worse, without me quite realising what he was doing, he put a soft cast on my foot, using a plaster bandage with magnesium in it that helps keep down swelling.  But I can't get it wet.  And I don't go back for a week, which means I can't take a shower.  On the one hand, I've talked to a few people at work (we are an orthopaedic hospital, after all, even though we mostly deal with children and adolescents).  Several suggested putting a heavy plastic bag wrapped tightly with tape over my foot, but the problem I have with that is the layout of our bathroom.  The  shower has two doors and is set with the tub between two tiled pedestals that are tiled halfway up and glass above, so glass on three sides.  I have been using a shower chair, but if I sit on it and open the door with my foot out in the bag, the shower head is on that side and the water will spray out, but if I turned on the other side, my foot would be on the wrong side to put it outside.  Plus, the tub doesn't quite drain quickly, so if I get up to get out, I'd have to put my foot down into the water, which defeats the process.  So it's sink baths fo me, I guess. :(  So yeah, not ideal.  My roommate has been mocking me unmercifully and not letting me forget that I was not being compliant, and rightfully so.  So, since I don't want surgery and don't want to be out for weeks on end (wearing the boot), I will wear the boot like I'm supposed to.
Posted by Eilir at 16:24 No comments: