My friend found this on YouTube and I found it hilarious

As I'm sure you're aware, it's a parody of Disturbed's cover (and its video) of Simon & Garfunkel's 'Sound of Silence'. I do like their arrangement, although of course I am a fan of the original. Here is Disturbed's version:

and here's the original version by Paul Simon and Art Garfunkel:

It started the Wednesday after Thanksgiving. I had a low-grade fever and a sore throat. I was off work Thursday, pretty bad off with a nasty respiratory virus (it wasn't the flu, I'm sure, as it was a gradual onset and didn't have a higher fever or really much of a whole-body ache). But it was nasty. I was feeling a little better that Friday with Mucinex and Stahist, and it was a light and short day as we had our company Christmas party that afternoon, so I left by 3 pm. I was careful to handwash or use sanitizer, but I did feel better. By 4 pm, though I was in bed because the sun was going down and that always seems to make a virus disease feel worse, in my experience. I spent the whole weekend in bed. I barely made it into work, but I did go to work Monday through Friday. I did feel better after Tuesday, but Friday (as in two days ago) was the first day I really felt myself again. I even went and had dinner with our friend who has cancer, as we were better and I think we weren't contagious anymore.

Yesterday I did a lot of errands.  I went to the bank and put in some money that was an unexpected gift.  I finally was able to get my taxes from H&R Block.  Lord save me from accountants--it took me almost an hour and a half to pick up and pay for my paperwork, the man there was so meticulous.  Thank goodness I came in when I did.  He was with a client when I came in, so I had to wait a little while, but there were three or four after me who waited the entire time I was here.  But I eventually left with everything I need.  Then I went and got my insulin and some medications for YKWIA at the pharmacy before they closed.  I stopped by Staples and got some ink for the printer, as we hadn't had any since September.  I also got gas and a few groceries.

I was tired when I got home. I'd left at 10 am and it was about 2 pm when I got home.  I did some work around the house and then went to bed for a nap for about 45 minutes.  We were going to work on the floors yesterday and also do the postponed latkes for Hannukah that we missed.  But I was really tired, still, so we put it off till today and cancelled the game.

This morning I woke up clumsy, feeling bad, and full of mucous.  It's better now that I've gotten the Mucinex and Stahist in me, but I am coughing, blowing my nose, sneezing, etc.  So maybe I'm not out of the woods yet.  I thought I'd gone into a sinus infection.  That may be true, but I'm out of breath easily and wheezing.  I think I may be going into bronchitis.  I do have a nebulizer and some medicine for it.  I may see if that helps, and use it at night.  I've swept so far, and the mopping is nigh.  I'm also doing laundry, as I didn't for two weeks and I have one purple pair of pants left (hey, I liked the alliteration), and no other pants or shorts to speak of.  I'm running around in pyjama pants and a t-shirt in the house right now, and those were both leftovers, the shirt from yesterday and the pants from the dirty clothes.

Anyway, I guess I'm mostly back.  The house is better--I did the dishes and bathroom and trash.  Thursday night I took the trash containers to the kerb and did a thorough job on the cat boxes, as they'd gotten bad while we were sick.  I need to get something stronger for the shower, like Kaboom, to take care of some of the stuff on the tile.  But otherwise, things are better,  and I do feel better.
Posted by Eilir at 13:35 No comments:

It was a very nice workweek

A little shorter, of course, with the funeral on Monday, which was very nice.  All three sons got up and shared memories.  It was a good turnout.  We didn't go to the internment due to the bitter cold and wind; the family had a big potluck later and our friend was set for food, so we gave the family some space to mourn.

She had such a lovely personality, and I miss her very much.

After Monday, of course, it was back to work, but it was a normal week without being overwhelmed, and Friday was actually the way Fridays should be, a good day to play catch up.  I'm keeping track of what I'm doing each day for my boss (as are my department co-workers), and I actually do quite a lot and am very busy, and this is borne out in my log, and it's giving me a greater perspective on how much time it's taking to do what, so it's been useful.  My partner downstairs has been helping with the off sites as she was caught up with her things, and that's been very helpful.  We actually have all but four scheduled, and of the four, one is a coordination of different departments that is being worked on at the university, one is a problem one that was scheduled but I'm trying to get rescheduled to an earlier time, one is in the hands of the sedation scheduler there and I'm just waiting to hear back, and one I'm waiting for word from a care manager, as theirs is scheduled a month away and both family and the doctor want it earlier but the university has nothing, so I've asked if it can go to another facility.  I'm using two different facilities beyond the university as its schedule is such that I can't get anything within a month for any type of ultrasound or MRI, and when I cancelled an ultrasound I'd taken for January but was able to get next week at another facility I let them know why.  Really, I'd like to schedule there but there's roadblock after roadblock.

Yesterday I did my friend's laundry, my shelves to dust, and some things around the house, but mostly it was relaxing.  We went over to my friend's house whose mother had died, and we had fish from Captain D's and visited for a while.  There was a big storm that blew up just as I got back with the fish, and it really rained and thundered.  Today, however, it is up in the 60s and sunny but also windy, and I have my laundry to do and just a few things around the house.  Not bad for the second day of December.  We're going to see Fantastic Beasts: the Crimes of Grindelwald today, his treat.  I'm out of my free passes from work, but I've taken care of most of the movies we've gone to in the last couple of years with them, and last time (for The House with a Clock in its Walls) I was able to do both the free passes and a gift card for the concessions, all because they were employee appreciation gifts over the years. 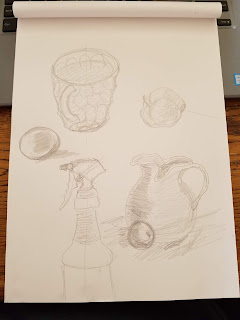 I did some drawings earlier.  I never had anything beyond third-grade art, and I would like to draw better.  I used to do it almost obsessively, doodling a lot.  I haven't drawn in years.  Anyway, I have this book on drawing basics called Drawing for Everyone by Bruce Waldman and drew some things based on the first two chapters.  YKWIA, who is an artist, looked them over and said the main problem was that I was very timid about shading and needed to do so with more confidence.  Otherwise, they look pretty ghostly.

I think I'll do some reading before we go.  It's been a while and my book awaits.  I'm still reading that Kate Morton book, and I'm only about a fifth of the way through (it's 530 pages).