Why are books that shape? From Codices to Kindles, Why This Rectangle Stays Golden
Posted by Eilir at 09:21 No comments:

It's an interesting and somewhat concerning phenomenon

The Ringification of Suburban Life
Posted by Eilir at 09:03 No comments:

He was shot from behind at a routine traffic stop. No motive is known yet, but a suspect is in custody, but he had permission to wear his turban and beard on duty, so one does wonder whether it was directed towards him as a peace officer or him as a Sikh. There are lots of people out there who are anti-Muslim who see the turban and misidentify Sikhs as Muslim, because let's face it, hate is partly based on ignorance and stupidity.
Posted by Eilir at 08:47 No comments:

I finally got to the YMCA around 6:15 pm, spent 10 minutes on the reclining elliptical/Nu-Step machine (starting small), and then an hour in the pool, doing my exercises.  I feel really great.  On the other hand, I was able to weigh myself on the scale in the ladies' locker room. I'm 310 lbs, which is just two short of my all-time greatest weight of 312. :(  So I definitely need to make changes, mainly staying away from the vending machines, since I eat pretty well at home, with all the homemade, vegetable-laden food.
Posted by Eilir at 20:34 No comments:

I should be asleep

But I'm not very tired, which is a little odd.  I was pretty active today, walking over 7500 steps, although I did not go to the Y and work out, mainly because I had some errands to run that had to be done today and while I could have gone to open swim after 8:15 pm, that's a little late.  I don't know about exercising that late.  Of course, it's a warm water pool and it's pretty relaxing, so maybe it'll be fine.  I'm definitely going to try to go to the gym Saturday for a much longer time, try the Nu-Step machines and the pool and try to figure out where the sauna is, as that's always nice to end with.  (I did see where the hot tub is. I've never been in one but it looked very inviting.

I was sharing things from my newsfeed on Facebook and apparently, I got share-silly because a pop-up window came up asking me if I was a robot; I had to check the box to continue.  I need to be doing more sharing on this page; I've hardly written anything all summer.  I'm going to take the 'habit' I have on my phone on Habitica (the app that's a productivity one but with avatars and roleplaying game trappings that I've used for years now) and make it a daily, meaning I'll be more likely to think to write.

There are several applications I'm using right now that I'm finding useful for my health, beyond the one that comes with my activity tracker or something like Samsung Health or Google Fit.  I highly recommend them:

Daylio -- This is a mood tracker that I've used now for over 1100 days (I know, I have entries for that many).  Given that I have Bipolar Disorder II, it's been really helpful in seeing how my mood varies.  I'm generally in the good category, so that's nice to see.  It allows you to track activities as well that might contribute to the mood.

PainScale -- This app allows you to track where and how intense your pain is, as well as a journal, keep track of treatments, triggers, and you can also track food to see if what you're eating is contributing.  It keeps track of the weather and activity factors as well.

Ate -- This one is in beta.  It's a visual food diary that has you take a picture of your meal and then answer a few questions that have to do with mindfulness--why did you eat, who did you eat with, where did you eat, etc., and rather than keeping track of nutrients and calories, it asks were you 'on path' or 'off path'.  It also calculates the time between eating.  So instead of working with minutiae, you're getting to the reasons why you eat and how mindfully.  I mentioned it to my therapist, actually, as in addition to cognitive-behavioural therapy she includes mindfulness. I'm seeing her about every three or four weeks.

Okay, I think I will try to go to sleep, maybe listen to some soothing music.  I've been listening to the collaborative album Ed Sheeran put out all day, and I've now got 'South of the Border' stuck in my head.  I like it, don't get me wrong, but it's too damn catchy.

On Wednesday, I graduated from aquatherapy (got the shirt to prove it). :)  Now I could go to the pool at Cardinal Hill for $5 a visit and work out there, but that would get pretty expensive pretty quickly if I want to do it two or three days a week, and I'd have to get there by 5:15 pm to get anything done, as the pool closes at 6 pm. I usually get off work at 5 pm--I had a special schedule where I got to come in early and leave early on Tuesdays and Thursdays temporarily, but as we progress into autumn and winter it will be less likely I can do that (I'm very light-sensitive in the morning as far as waking up, which is why I bought an alarm clock that lights up in the morning.) 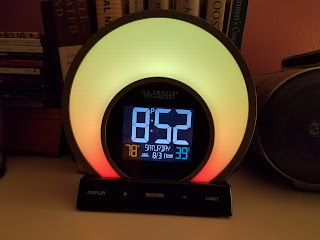 It has different modes including cycling through colours, an evening mode where it shuts off after a certain time, one that changes colour to do with the humidity and temperature, and then a guided breathing one.  But most importantly, a little before the sound alarm goes off, the light gradually brightens to bright white when it's time to wake up.

Anyway, I talked it over with my therapist and I decided to join the YMCA last weekend.  I was able to get 10% off and no joining fee through work, with everything prorated for September.  I tried to go to the pool last Monday, actually, (only Beaumont YMCA has a warm water pool like the hospital), but the heater was out.  They got it fixed later in the week, though, so yesterday I went and spent some time doing my exercises.  It was during an open swim, so there were a couple of families with small children in it, but I did fine, at least until they were playing with a ball, but I still managed to get all my walking in, most of my leg exercises (I forgot a couple), but did forget to do my arm ones.  I'll do better next time.

On Monday [tomorrow], however, there is a class that I think I'll try to go to that's a basic workout in the pool.  Tuesday I have my first real session of cognitive-behavioural therapy for fibromyalgia.  Wednesday I'm going to try to go to the Y again for open swim and do my exercises, and then again on Saturday.  I hope to make that a standard thing.

Today I'd thought about going because we weren't playing the game, but I'm having a slight reaction to a shingles vaccine [my second dose], where my arm hurts a bit and my joints and muscles are aching a little.  So I didn't quite feel like getting into the pool today.

Anyway, that's what's going on these days with me.  I thought I'd actually sit down and blog for a bit.
Posted by Eilir at 21:22 No comments:

It's been generally a good day, except

I found out that an old acquaintance (not close, but still, one I've known for decades) apparently died a couple of months ago of heart issues. He was my age. There was no memorial. This, on the heels of a former co-worker's death this week from cancer, has me thinking of my own mortality and that of those close to me.

But before we got this news, I took YKWIA out for a birthday Indian buffet at Masala, and it was wonderful.  They even had gulab jamun, which I adore, this time!  We also did some errands.

They're having a tailgating thing at work today (it's near the UK stadium, so it seemed a good opportunity to get my co-workers together), and I was thinking of going, am actually wearing the shirt they'd bought for us, but between the news and the fact that I'm stuffed with Indian food to the point of near torpor, I decided not to go.

I've done my shelf dusting for the day.  I have some laundry to do and the game notes.  Also, I need to take things to the storage unit and put them in there, put away my laundry from last week, make my bed, and generally straighten up my room.

Tonight we're planning on watching Cats, which I have out from the library. I've never seen the musical.

But before I do all that, I really want to take about a 45-minute nap.  So I'll stop here.  Perhaps I'll write later, though.