Sure, you have to know the kosher laws and my libations must technically be off the property, but last night's Sabbath dinner was wonderful: tilapia in wine, onions, and herbs, salad, challah, kugel, and asparagus with mint sauce, all very healthy and not very expensive at all, much less than you would pay in a restaurant, and much tastier. I think the cook outdid himself this week. It means he has to go out on the bus to the bakery to get the challah, which is downtown and has odd hours, as I can't because I'm at work and they're closed by the time I get off work, but it is well worth it. But he cooked most of the afternoon, I think and was very tired afterwards, and I cleaned up, and I was in bed by 10 pm. 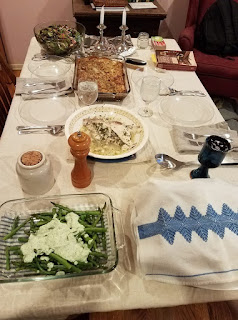 This makes me so angry

I read about this the other day and was so mad I could not express myself coherently at all.

School Made Six-Year-Old Girl Do 'Cafeteria Walk of Shame,' Return Lunch, Because She Didn't Have Enough Money
Posted by Eilir at 09:11 No comments:

Wow, the power one person can make

I've always had a fondness for swallowtail butterflies in particular. When the pipevine swallowtail lost habitat in San Francisco, they disappeared from the city. This man created the conditions needed to bring them back. For all that we hear about the destruction of our planet and denizens, this proves that one person's actions can make a difference in terms of fighting extinction.
Posted by Eilir at 08:47 No comments:

the three-day weekend.  Here's hoping things go well at work (yesterday there were several fires to put out, metaphorically).
Posted by Eilir at 07:45 No comments:

After the fiasco last October

when I lost all my documents doing a Windows update, I was somewhat trepidatious about doing the May 2019 update.  But, one thing I changed in the intervening months was that I had put all my documents on an SD card in my laptop, with Dropbox as a backup (the latter had been the case for the documents I lost, and with the exception of a couple of weeks' worth, I saved most of the rest.  Backups are important, people.)  Anyway, I had heard that the update wouldn't install with a USB drive or SD drive because of an issue with remapping the drives, but that if you disconnected the USB or ejected the SD, it should work fine.  Since ejecting the card had been the plan all along, I did so, downloaded the update in about two minutes, and had the whole thing updated within five.  It was the easiest Windows update that I've ever done, and it seems to be working correctly.

I did it this morning because I'd woken up at five and was just awake, and couldn't go back to sleep.  So  I got up, took a shower, got ready, and did the update.  I left the house at about 6:20 am, stopped by Kroger for caffeine, and went into work, getting there about 7 am.  So I  have until 8:30 am to just chill and do what I'd like.  I've gotten my personal e-mail squared away.  I'll check social media and the news.  I'm on my hotspot on my phone rather than the hospital's WiFi because I promised a long time ago not to use the hospital's equipment to blog at all after someone had a conniption over something I'd written during a break at work.  So, it's my equipment, my connexion.

Okay, let's go see what's going on in the world.  I did see on my phone that Teresa May, the prime minister of Britain, has resigned.  I don't care for her policies, or for the idea of Brexit.  Not that it matters, I suppose, given that I'm not British and they don't care about my opinion.  But she certainly was very polarising.
Posted by Eilir at 07:41 No comments:

Grumpy Cat, Internet Celebrity With a Piercing Look of Contempt, is Dead at 7

Her real name was Tardar Sauce. Requiescat in pace.
Posted by Eilir at 09:59 No comments:

'The Big Bang Theory' finale closes with a big dose of heart [contains spoilers] I have only watched 'Big Bang Theory' fairly hit-or-miss throughout its tenure, although I do have several seasons on DVD, and hope to complete my collection. I just don't watch much live television and don't have cable.TV. But...I do love the show. So it was a great delight and a little sadness last night to be over at one of our friend's housing eating Chinese food from Jin Jin and it came on. :)
Posted by Eilir at 09:48 No comments:

I'm reminded of this song by Harry Chapin...

Okay, this is an old WWII Disney propaganda film

But it has a lot of relevance today, don't you think?


Thanks to YKWIA for showing it to me, albeit for demonstrating that I shouldn't be so ready to follow emotion and get things out of vending machines.
Posted by Eilir at 12:23 No comments:

I've been a little busy lately

Last week was mostly preparation for a colonoscopy on Friday. I won't say it was fun, but it was necessary, and not too bad.

We as a society are much more open about speaking up about colon cancer and screening than we used to be. I have to admit, I never thought about it (I was still fairly young) until  Katie Couric spoke about her husband's cancer and the need for screening colonoscopies.  It's not the most pleasant test in the world, after all--who really wants to be scoped up the butt after a day of clear liquids or more and prep that make you live in the bathroom for hours?  But I have to say a couple of things here, having gone through my second one last week.  One, the scope itself is painless and quick, and if you've done a careful prep, they produce good results for seeing the colon and any polyps or cancerous growths that may be there.  Two, the preps are getting much better.  Five years ago, when I had my first colonoscopy, it wasn't as bad as many had said (it seems preps vary on doctor and patient needs).  This one, while I can't say it was a complete cakewalk, did its job quickly, was easier to get down, and it allowed me to sleep despite having to start at 6 pm the night before for the first part and 3 am for the second.  It is called Suprep, tastes like cherry with just a little saltiness thrown in.  There are two small bottles.  You put one's contents in a cup, add enough cold water for it to be 16 oz., drink it, and then follow with four 8 oz cups of water over the next hour.  Then your system turns to liquid, and after about an hour and a half, you may just want to go on to the bed.  Then you get up five hours before your test and do the same thing again.  I drank a little Diet Sprite in addition, and some more water, to stay hydrated.

By the time I was getting ready to go to my scope, everything was nice and clear, although I was eyeing the bananas on the table like they were ambrosia because I'd only had orange jello, veggie broth, and orange popsicles all day yesterday.  But all the hard work in terms of diet and prep paid off.  My scope went off without a hitch.  Dr Belin and the folks at Colorectal Surgical & Gastroenterology Associates made it an easy experience.  Literally, the only pain I felt was the putting in of my IV [I think I thwarted the nurse, as I'd given blood about a week before so she had to go through my wrist.]  I wasn't sore or anything afterwards.

They found one polyp, which was removed, and that was basically the same as the test I had five years ago.  I assume they'll send that away.  They always give you pictures and everything looked clear.  So I feel good about it.  I was originally told that I should have them every 5-7 years because of the polyp they found on the first one and was all set to put it off to about 7.  It's been 5, but after finding out my dad died of colon cancer, I thought I should have another one.  They're recommending I have one every 5 years now.  After my test, I was communicating with my stepmother on Facebook, and I learned that my paternal grandfather also died of colon cancer, and I came this mouthing to see if the frequency of the test should be changed but it is still five years.

Now if you're still with me, here's the thing.  I have a good friend battling stage IV colon cancer right now  He is in his early 60s.  He never had a colonoscopy screening, despite a family history of a genetic form of colon cancer,  so it wasn't caught early.   My friend's brother, having lost a father and now with his brother.s diagnosis, has to have the scopes every year.  He takes it in stride.  I know people who have good access to healthcare (and one with a personal history of another type of cancer), who are old enough for the test, maybe even a decade or more in, and they won't go because of either the prep, the scope, or the fear of cancer.  Others, like the friend who drove me today, are due for the screening but their health insurance is so high deductible that they can't afford the test.  In a civilised society, that shouldn't be the case.  I'm going to check with her because my understanding was that screening ones have to be done for free as part of the still-hanging-on Affordable Health Care Act.

Please keep the conversation open.  Don't treat colorectal screening and testing like some taboo.  Some still do.  Encourage your loved ones to get tested.  Get the test if you are 50 or over, or make a case with your insurance if you have any family history if you are younger.  Prevention really is the key.  Take care of yourself and your loved ones.  Read up on colorectal cancer and how to prevent it. You'll be glad you did.