This is also brilliant--use your brain, critically think, and watch your sources of information

I love the shocked face he makes; Pitt did pretty well

We are always living history, but now more so

The audiobook I'm listening to, The Great Influenza: The Story of the Deadliest Pandemic in History, by John M. Barry, just spent a chapter on how Woodrow Wilson's contraction of the 1918-1919 pandemic influenza in Paris had terrible effects on the post-World War I talks with Britain and France. Where he'd been set to remove himself from the negotiations, he instead came back from the illness, probably too soon, and gave in to all of France's demands, the very ones that set up the rise of Adolph Hitler and WWII. Since that time we have made connexions between influenza and neurological and disposition changes.

The next chapter is discussing the resurgence of flu the next fall, and how it finally faded over the next few years. But millions had died, many children were orphaned. For many, the effects were lingering, some for a year or more. But through so much of the pandemic, it was downplayed due to the war effort. 'It was only influenza', ignoring the virulence of this strain.

It's also talking about the lack of writing about the pandemic at the time, and how that was like the mediaeval accounts that lack much of any study of the Black Plague. It reminds me that we are living through history. We need to take pictures of grocery stores with their lines. We need to write our stories. I started this blog in 2001 shortly after the attacks on September 11th. It's waxed and waned over the year, but this reminds me that this is an opportunity to put down what we do and how we feel.
Posted by Eilir at 16:10 No comments:

So yesterday was actually pretty productive

and I'm on track for today as well. Yesterday I:


Today I woke up at 7 am because I'd set my alarm to early as I had not done my normal task of washing the percolator and its basket so my roommate could make coffee this morning. I wanted to make sure I was up before him, as when he gets up to make coffee he is usually so out of it and if the pot and basket are clean, he is too out of it to do himself. It's one of those little things I do for him each night, I just forgot to yesterday.  For those who don't understand, you try using a percolator rather than a Keurig and see how you do when you're half-awake.

So after I got that taken care of (three hours before he woke up!) I:
Other plans today:
I wish I was in a good place for gardening.  The soil in the yard at roommate's house really needs to be worked and amended.  I thought about getting a hanging plant yesterday when I got groceries from Kroger, but it's cool right now and we've been under frost warnings.  I'll look next time I make a trip out to the store.  But container gardening is about our only hope right now, as neither of us has much to spare in terms of getting what's needed to improve the soil.  I do have a big tub at the storage unit that might work for a tomato plant later once the frost is not an option.  I just need to drill a few holes in it, although a co-worker has my drill at the moment.

Okay, I think I'll go ahead and post this and switch over to working on the phone.  Have a great day.
Posted by Eilir at 12:43 No comments: 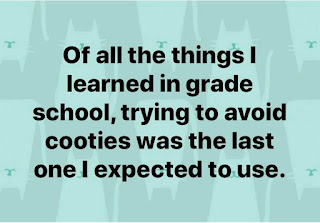 Good information embedded in the humour

it does help if you can understand a Scottish accent, unlike my roommate, who gets about every three words, mainly the first and last of a phrases

Starting the second round of staying at home for a week. Things I'd like to do differently:
That's a start, anyway. I'm off through Tuesday before I return to work this time.
Posted by Eilir at 10:21 No comments:

You call that social distancing! Now grandma's fallen down the well!

to watch the first episode of Dark Crystal: Age of Resistance on Netflix today.  It took me right back to the magic of the original movie. :)

of my week off.  I managed to get everything taken care of that I could in that week I was still working so my backup will hopefully only have to deal with add-on surgeries (we're only doing fractures and casts at the moment) or urgent offsites (the University of Kentucky, our main imaging partner, is scheduling non-urgent scans in July as of yesterday).

I tried to get up at a reasonably early time for someone who had really nothing to do today, although I did reset my alarm so it wouldn't start at 5 am.  I tried for 7 am but instead wound up getting up about 9:30.  I got ready and went out to Kroger for a prescription I had waiting for me and finally managed to score a package of paper towels while I was at it, then came home and since then I have mostly been looking at the news, or Facebook, or listening to music, or downloading audiobooks and looking at books to read.  So today is my preparatory day for the rest of the week.

So far I haven't been very bored, although both the food in the refrigerator and my bed are calling to me, so maybe a little. I have discovered that my roommate binge-watches 'Dark Shadows' on Hulu at the moment to wake up and meet the day.

Last night the kitten was inconsolable because his toys were all missing except a ball with a bell in it that really held no interest for him.  I had the intuition to move a marble-top washstand in the living room and voilà! we found his hoard of toys, including the butterfly with the crinkly leaves he adores but I had never actually seen because he hid it the day he got it. Now I've got both cats on my bed and I'm listening to Bastille in my room facing the window with the orchids and a blooming redbud tree outside.

I put a little laundry away, but today was about relaxing after working a week and a half out in the world while most people have been off or working from home.  Our hospital is screening everyone with a temperature check before they come into the building--patient, visitor, staff--and distributing homemade masks that are primarily to help you remember not to touch your face and keep out any droplets.  It won't protect from the virus such as the ones the first responders and ERs have (the lucky ones, anyway), but it'll keep us from pulling any from other places that may need them more.  Our team approach is reducing exposure.  I haven't been able to eat with my lunch bunch all week--my boss directed us to eat lunch in our offices and keep the doors shut.  The only time I go to any other place in the hospital is to go to the bathroom, get a drink, check the mail in the mailroom, check my offsite folder (which I can see through our department door, so I don't have to go in unless there is one) or, in yesterday's case, I filled in at the sign-in desk for a half an hour so someone could go to lunch.  I had to stamp passes the parents had for parking, so I was very cognizant not to touch my face and then washed my hands really well when I was done.  I also wiped down the whole office with disinfectant before I left for the day, as someone else from upstairs might use it while I'm gone.  Of course, when I come back next week I'll do that all again.

I think I will lie down just a bit.  Governor Beshear is going to give his update at 5 pm, so I want to be up by then.  The updates have become known outside of Kentucky, and people are creating memes and videos of him.  There's a fund set up to help with the COVID-19 fallout in Kentucky and someone created quotes on t-shirts with 100% of proceeds going to that fund.

This evening I may go for a walk (by myself).  I have some new shoes that (unlike the walking shoes and Mary Janes I had) are completely level and not worn down from my natural walk, which is on the outside of my feet.  My Mary Janes, which were three years old, were so worn down they were at a 0-45 degree angle and my foot was rolling over every time I walked, so I had to throw them away.  They were in such bad shape there was no reason to try to donate them.  The walking shoes were getting there, too, as they're five years old.  So it was beyond time.  I only have a pair of sandals (which also need replacing) and a pair of house shoes, as I'm pretty utilitarian when it comes to shoes and keep them to a bare minimum.  So these are work shoes but look like a sneaker.  They are from New Balance, and they come in an extra-wide size and don't press badly on my feet (which is bad when you have diabetes), but they also have a steel toe, anti-static protection, and skid-resistant shoes, which probably isn't bad since I'm accident-prone.  So I'm trying to break them in before I go back to work. I wore them to the pharmacy today, and like I said, may go for a walk in a little while.  They're a little heavier than normal due to the steel toe, so I had to be careful not to put the accelerator down too far when driving. Talk about a lead foot. :)

Okay, that's all for now.  Hope you are having a wonderful socially-distant week.  Hopefully, you are staying at home unless you're an essential worker or needing to go out for supplies.
Posted by Eilir at 15:38 No comments: