Anyone who has ever been in a bad relationship can relate to this...

So the kitten has a thing for succulents--just succulents as far as plants go. He has ravaged the red velvet Echevarria, pulled up and nibbled on various aloes, and yesterday while watering the plants I made the mistake of moving an orchid that has two tiny Hawthornia plants in their own tiny pots from a corner so I could water the little ones easier and lo, and behold, the kitten plucked one out just like a bonbon and I have no idea what happened to it. It's just succulents--he leaves the orchids, violets, and bamboo alone, thankfully. The zygocactus he gets occasionally. He likes the leaves thick and chewy, full of sap, apparently. This is why I took so many plants to my office in the first place, and then I found another place for them when I was told to remove the plants at work by my former boss. Speaking of which, we went the other day and the shamrocks were dying. I need to tell them to either water more or get them out of the really big southern window before they're crispy. Everything else looked fine.

Meanwhile, I was cleaning up the soil in the bedroom when I heard a crash and crockery breaking and turns out my roommate accidentally knocked off an African violet from the toilet back, saving the violet itself, which is in a plastic pot, but the saucer underneath broke in two and soil got all over the place. Sigh. At least the saucer didn't break the tile, too. It hasn't been a good day for plants.
Posted by Eilir at 13:12 No comments: 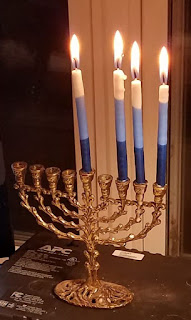 We're having leftover latkes tonight. Last night I didn't blog because I literally made latkes from 4 pm to 7:30 pm when we sat down to eat. There were cheese latkes with applesauce, potato latkes with sour cream, and zucchini fritters with tzatziki sauce. I doubled the cheese recipe and tripled the potato one. :) So we'll have some for tomorrow, too.

Today has mostly been relaxing. Neither one of was were doing our best to get going. We did go out the grocery a little before they closed to get some mints for a friend who is ill, and stopped by to see him. Also, we needed more candles and ran out to Bed Bath and Beyond for those, as pictured above. We watched a couple of episodes of 'The Dragon Prince' while eating tonight.
Posted by Eilir at 19:53 No comments:

Well, the warm water pool where the class takes place is down (again) due to a heater issue. So no class tonight, to get in the way of latkes. But I am little disappointed; this is about the third time there's been an issue since I joined in September, and it's the only warm water pool in town in the YMCA system, which is good for aqua therapy exercises, but usually, when I go outside of class, there are lots of kids roughhousing, making it difficult to exercise at all during the open swim. I really am considering cancelling my membership. That's the whole reason I joined the YMCA.
Posted by Eilir at 12:38 No comments:

Enjoying a day off from work, the third day of my five-day weekend. :) I've folded laundry, had a leisurely shower, and otherwise just relaxed and spent time with my roommate. Now he's out so I'm listening to Pentatonix' Christmas music and calming a nervous dog who wants her master. I think I may do some reading and writing. We'll probably watch more of 'The Witcher' later, too. But tonight is all about latkes. I have gelt hidden away and all the ingredients ready. And thank goodness my food processor is still going; his died at Thanksgiving. That makes it so much easier to grate the potatoes and zucchini. :) I'd planned on going to a Water Fit class tonight (I'm already dressed for the gym), but the latkes do come first. It's my main Hannukah present for him. I'll look up to see if it's even on the class schedule since it's Christmas week. It's not usually till 7:15 pm, so maybe I can do the latkes earlier and have them ready for the hanukkiah [menorah] lighting at sunset.
Posted by Eilir at 12:37 No comments:

You'll never see Saint Nick the same way again. I knew most of these, but I thought I'd share. Remember, the truth will set you free.