It's supposed to get unseasonably cold tonight 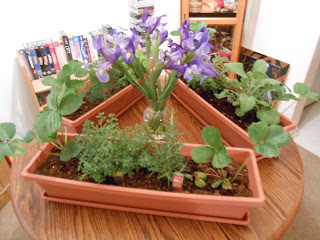 So the herbs, strawberries, and pepper plant are all in the house for the night. The pepper, which isn't pictured, is in the bedroom with several blooms and five little peppers started on it, about a half-inch long (the peppers don't get very big, maybe about 2.5-3 inches, and they're purple bell peppers). The window boxes are on the dining table. The strawberries are already sending out runners and the herbs have already grown, especially the basil, which is probably the most cold-sensitive of the lot as well. So anyway, they're inside and safe from any potential frost.

I just got off the phone with my mom and we made plans for me to visit later in the month. She got the card I sent, despite the fact that I sent it from a mailbox that didn't get picked up on Friday until 3:30 pm and I totally screwed up the zip code (she's recently moved).

I am very tired and sore tonight, the result of all the work I did for so many hours yesterday, plus cleaning a friend's house today, including some things A has been doing for me to keep me from bending over as much. I thought I could do it, and didn't ask for help. He still helped do some things, though. But now I hurt. We didn't play the game, of course. I didn't finish cleaning my house, didn't have the notes finished, and Brenda decided to stay home for Mother's Day instead of coming in and working on characters again. I hope she wasn't too disappointed.

I did take those evening meds last night and will again tonight. I'm cold (just closed the windows a bit ago and it had dropped to a little less than 60 degrees). I think I'm going to curl up in bed for a little while, even though I took a nap earlier. I'm just so tired and achy. Then I'll come out and fold the laundry that wound up dumped on the loveseat last night when I brought it in. I hope I won't have to iron anything.

We did have some fun today. We watched a musical episode of 'Todd and the Book of Pure Evil' that was hilarious. I nearly lost it when the slackers outside the school (whom we suspect to be daemons) went into a doo-wop number. It was surreal. Sadly, we have just three more episodes to watch (it was cancelled after the second season). I've really enjoyed watching. It's on Netflix should you wish to catch it. At first it will seem like a lame 80s show, and eventually you'll realised that 1) it's recent and has a wicked sense of humour and 2) Canadian humour is both hilarious and weirder than you even thought. Enjoy.

Hope you had a great weekend. Mine was pretty productive but I'm totally ready to crash now. If I don't write later, good night.
Posted by Eilir at 20:50