I awoke to hail this morning 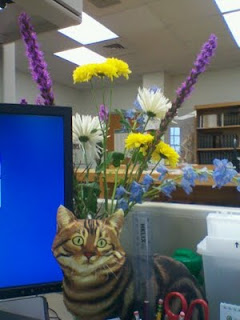 Well, more properly, I was lying in bed waking up after my alarm went off and an odd noise started. It was hailing against the window. Apparently we've had severe thunderstorms all night (oddly, for a mostly former brontophobe, I sleep well during thunderstorms, as long as they're not rocking you out of bed).

It's just getting light outside and I ventured out to the laundry room for some caffeine. It has rained a lot over night--the front walk, which steps down to get from the parking lot to the front door by three steps, is flooded. I haven't even tried looking at the creek out back (always a concern, but there's a high bank, although I've seen it almost crest before). The lightning is apparently 4-5 miles away and getting closer. I decided to sign up with the Weather Channel for text alerts. My notifications tone won't wake me up or anything, but I'll have more info if I'm awake.

It's odd to up so early on a Saturday. But I woke up at 4:30 am mostly rested, and reset the alarm for 6 rather than 9 as a result. Here's the agenda for today:

(Now this is how a hoarder's mind works--I went to type 'recyclables' after trash and almost typed collectible instead. Coincidence? I think not.) Since it's raining at the moment and the thunderstorms are supposed to be scattered, I'll hold off on the Kroger run a little while, although I don't have anything else in the house to eat and will eventually get hungry enough to go out and do it. Laundry and cleaning I'd rather do when there's more light and less rain, since in involves trips across the parking lot. So I guess it's game notes for now. Incidentally, my phone came with the read-only version of Documents to Go and I thought, what the hell, let's see what the game notes in PDF look like on the phone. Tiny. Oh, you can make it bigger, but it doesn't flow well; you have to drag the screen around quite a bit. Granted, when I prepare a PDF for the Kindle, I make the font big at first and that helps. I haven't tried that with the phone. Only problems I've had with the phone so far:
But generally I'm very happy with it and have already done lots with it in terms of experimenting and I've found very helpful things about it. Not bad for less than 48 hours. I'm so glad I got the unlimited plan, though. And I made sure I got an application killer to help with battery charge/memory. The latest one I got, though, was one for keeping track of my bank account. See, I don't write cheques except maybe to the bank to withdraw money. But I wrote two for my tax bills. Plus I have the IRS back payment coming up. So I wanted something portable to tell me how much money was really available (there's a huge difference between what's in the account right now and what I can actually spend). So I downloaded that, popped in the information, and it's very simple to update, plus it doesn't contain any account info or anything I'd want to be very secure, just a running total of balances.

I haven't bought an application yet. Or even downloaded a free game, although there was one called Bubble Buster that looked a bit like Snood that sounded fun over on the Amazon Android market. But some people said it made it very sluggish when returning to the main menu and even with the program that turns off the applications, I didn't want to risk any issues since mine has a slower processor than the high end phones. I'm really more of a utilities girl myself. I don't want a phone to play games and waste a lot of time; I want a phone that will help me do things easier. Games are okay, I guess, and I have a few on the Kindle for when I'm at a doctor's office and don't feel like reading. But they are silent, and the ones on the phone probably have sound. Taking off the sound takes off a fun part of the game. But they're pretty clear on the bus that they don't want you to play a lot of noise without headphones. And there's the headphone issue.
Posted by Eilir at 07:44