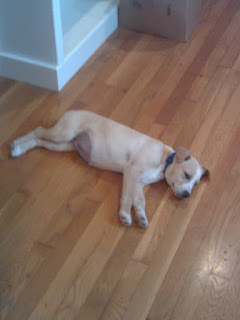 Isn't she adorable? This was the only really decent picture I got; the shutter speed on my tablet is too slow to really deal with a wiggly puppy. Next time I'll take my video camera with me and then I can take stills from that.

She came from the Lexington Humane Society, adopted yesterday. She's about three months old, so she's still in the housebreaking phase. She was a stray. As you can see, she's just been spayed and still has the stitches. She is very curious and has a tendency to gnaw on things when you're not looking. One dog (a collie/shepherd) is herding her everywhere, and she's bonding with her nicely. The other dog thinks she has cooties and is not sure what to do when she comes near her. One cat has been through this before, and is just, 'oh, damn, you did it again', staying up on the furniture and looking pretty stoic. The other cat (who is the baby of the family), is running around all bristled and has totally lost his mind, that they've brought in this thing that's about his size and it (gasp!) wants to play.

She is very affectionate, just a bit skittish, but I think that will settle down. She seems to be handling her new environment and people wonderfully, and they're already bonding as well. She likes the whole lap-puppy thing, but given the size she'll probably be, she better enjoy it while she can. She's supposed to be part Labrador retriever and part pit bull. You can definitely tell the latter in the face. Most of that is usually guesswork. Sadly, about 80% of those available for adoption seemed to be either pit bull or a pit bull mix, which says something about the people who have dogs with litters and then don't care for them. Apparently if they seem to be all pit bull, the Society doesn't let you adopt with small children, but if they're mixed, they do. That's not an issue here; the issue was dealing with other pets, and I think that will work out well. She already wants to cuddle with the others, they're just not having any of it just yet.

Anyway, I love having a new animal in my life (but I don't have to deal with it on a daily basis, especially as I have never had to house train a dog). But she's a lovely addition to the family.

Okay, time to get ready. I have a podiatrist appointment at 9:15 and want to stop by McDonald's and get a couple of egg and cheese biscuits to start my morning. Fortunately we never got any snow, none at all, and it's sunny and looks to be warmer. Have a great day.
Posted by Eilir at 07:44