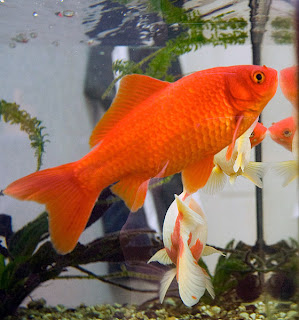 is running better. [This isn't a picture of my aquarium; these fish are bigger, but I've got both orange and particoloured, even an orange and black one, in the tank.] But someone suggested I break up the text with more pictures. Part of the reason I don't post many pictures is that I haven't had a camera worth spit. I hope that will change. But for now, this is just a public domain picture of the common goldfish. I've got six in a 29 gallon long tank (no stinking little bowl for them), so they're pretty happy most of the time. But the filter had a lot of mulm in it and it was clogged. I cleaned out the aquarium and now it's making the happy tinkling noise I'm used to. The fish were swimming madly about--I think they're happy.

Okay, it's definitely time to go back to bed. Good night.
Posted by Eilir at 02:58

Email ThisBlogThis!Share to TwitterShare to FacebookShare to Pinterest
Labels: Fish