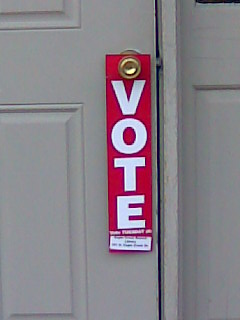 So says a sign that was hanging on my apartment building door last night. It was a pleasant reminder to get up early and vote (and provided details where for those who might not know.) So I set my alarm for 6:30 (it sometimes takes a good hour to actually get up), and just after that a very politically involved friend called to remind me. :) We talked politics for awhile and then I got ready. Now I am, and the fact of the matter is that I have to go to the polling place by about 8:30 so I can then catch my bus to arrive at the right time for work, but I have about 45 minutes to kill before leaving. I'm so excited, I just want to go ahead and go, but the library itself doesn't open until 9:30, when I'll already be at work, and although I could stay at the bus stop and read, it's a bit chilly for that. So I will rein in my enthusiasm. I guess I could take an earlier bus and get something to eat on the way to work, but really, I'm trying to be frugal at least until payday Thursday.

Oh, well, get out and vote, and exercise you're right to choose your representation. I won't tell you which way to vote, but please, just go ahead and go.
Posted by Eilir at 07:52