and kept my mouth shut. But it's caused a furor, because, well, a lot of folks don't realise the difference between movie creatures and real ones, a lot don't understand the idea of dinosaurs being extinct, and many others don't get satire. Which is all very amusing.

Steven Spielberg is accused of poaching dinosaur after Facebook users are fooled by 'Jurassic Park' photo: A photo showing the director posing with a mechanical triceratops on the set of ‘Jurassic Park’ went viral after people denounced him for killing the creature.

Here is the post, for those who haven't seen it: 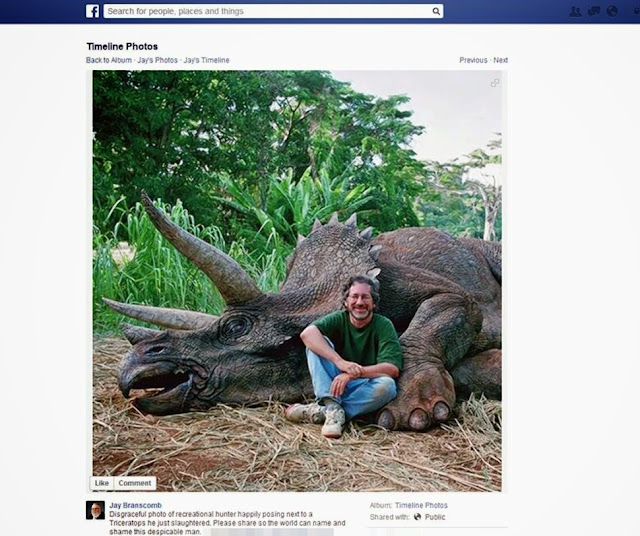 Now, I must confess something. I only glanced at the photo in my newsfeed, barely. I would apparently do well in the mythical town of Arkham, Massachusetts, where ghouls are rats and nightgaunts are bats, because my brain processed it as a rhino at first. However, because I have a nearly intrinsic distrust of anything I see on the Internet, I assumed it was fake, didn't share, didn't comment, and basically let it go. It was only later when I looked again, that I realised, gee, that's a triceratops, and the comments are stupid. But I was at fault, too, as I should have taken in the whole thing and not just skimmed it. But at least I did have the good sense to keep quiet, so no one realised I was being stupid. (Until now.)
Posted by Eilir at 13:21