I had a very nice Fourth of July 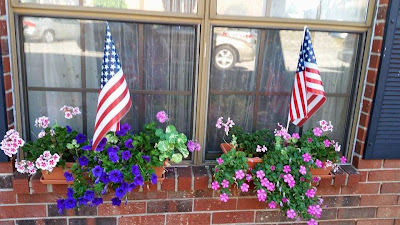 What I didn't do was go to the parade/downtown festival, which is a shame, but with my knee the way it is, it makes no sense to walk on it all over creation. Let's face it, pain isn't fun. I was really looking forward to it, too, and the weather was lovely today--cooler without a hint of rain.

I checked in on TvTag (formerly GetGlue) after the movie and someone said 'it was very true to the novel'. It wasn't based on a work of fiction, but rather on a 19th-century memoir/slave narrative of a free man who went through the harrowing experience of being kidnapped and sold into slavery. My friend didn't know it was a true story either, and I think my telling him made it somewhat harder for him to watch. I must say the acting was very good. I particularly think Chiwetel Ejiofor did an excellent job as Solomon Northrup. Personally, I am surprised he did not win the Oscar for his performance, but then I haven't seen Dallas Buyers Club, so I haven't seen Matthew McConaughey's performance. Michael Fassbender was very good as Epps, and Lupita Nyong'o was very good as Patsey. But I thought Ejiofor really was the best. I am glad the film won the Academy Award for Best Picture, at least. I would like to read the book, Twelve Years a Slave, which I have on my Kindle but haven't gotten to yet.

Well, the fireworks are still going off outside in my neighbourhood. There's a dog upstairs that has quieted down. I hope my friends' dogs are doing okay. Two don't really mind the sounds, but one just gets terrified and will stay under one's desk at his feet. But they used to have neighbours who set them off next door and they moved some time ago, so maybe it won't be so bad.

By the way, remember the show 'Vicious' I was writing about? I did get to see the first episode (that's all that's aired on PBS as of yet). It is very funny. It comes on the same time as 'Salem', which has two more episodes, but fortunately you can watch on the PBS website as well.

Okay, I think I'm going to start winding down for the night. It's almost midnight. I might play a little on the Atari before bed. :)
Posted by Eilir at 23:48