And a major frustration for those of us with history degrees. That and movies that are based on historical events with CGI and monsters. YKWIA was telling me the other day about how he had to explain to someone that the Persians did not have monsters with them at the Battle of Thermopylae like in the comic and movie, The 300. I think his friend was disappointed. 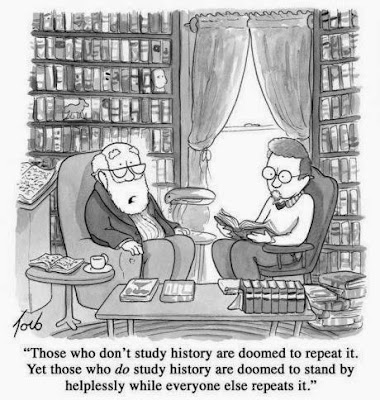 Sorry, I'm not having much luck finding the original source for attribution. Granted, I haven't spent days looking, just a Google search for about a half hour. It appears to be signed 'Loeb', and definitely looks like an editorial cartoon, or perhaps something from a magazine like The New Yorker. I found it making the rounds on Facebook, and it's on lot of different political websites, the earliest of which seems to be November 2012. My apologies to the cartoonist--if I can find the source, I'll attribute correctly.
Posted by Eilir at 23:30