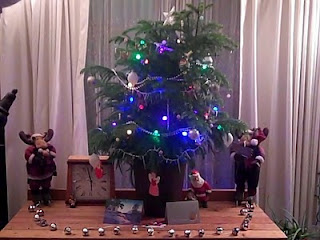 I left about 2 pm to go take a CD to the library that's due Monday and pick up a hold, Running the Books (yeah, it finally came back to me again, quicker than I thought it would). At 2:40 I took the bus to Lowe's, taking the granny cart with me. I found this lovely tree and it was only a little over $6 since it's a week till Christmas (and than goodness I got it, as it's only three days till solstice). I also got some small LED lights to go on it. I think they're bright and happy. Then began the trek home in the cold and ice. Mind you, I hope the tree survives; they're not hardy at all, and it was out in the cold for a good long time, although I covered it as best as I could with my scarf. I stopped by Subway, which was about halfway home and got a free footlong tuna sandwich with my points. Then I went across the street near Kroger and waited for the bus. There were quite a few people waiting and we chatted. I carried the tree onto the bus with the cart folded up so it wouldn't be in the way. I think people were amused in a good way and maybe got into the holiday spirit watching me go by or sitting on the bus with a giant evergreen. (Okay, it's maybe three feet tall, but that's fairly big when you're carrying it.) I got off at the library bus stop, put the tree back in the cart and headed across the street since the hospital had shoveled their walk and it's easier to cross on that side of the street anyway (There's no one turning right to run you down.) I walked very carefully down a very icy walk and once I reached the car lot one of the ladies came out and offered to take me the rest of the way home. Mind you, I was almost home by that point, but it still would have taken about 15 or 20 minutes with the ice and it had gotten much colder. So I accepted, she brought me the rest of the way, and I got into the house sometime after five, so it took about 3 hours to hunt down and bring back a tree, even with help there at the end. Then I decorated the tree and this is the result. I'm going to rest a bit and then wrap presents.

All in all, it was fun, though it took some determination. Now I'm going to check my e-mail and call the game master to see if we're gaming tomorrow, as it was his house that was so icy the other day, and Brenda may have called if she's stuck out in the country. But the notes were finished early this afternoon. I went ahead and put in on my USB drive rather than the Kindle this time since I'm leaving the Kindle home during the ice issue. Monday and Tuesday it's supposed to be warmer; I may take it with me then, since I am working on several books right now and I'm at the climax of White Night by Jim Butcher. My shoes performed admirably. I think I slipped a tiny bit maybe twice, and never to the point where I was in danger of falling. Go, purple shoes! (I also got asked by one person I met along the way where I got them, and I've gotten compliments on them by several people at work, so all around I think they're a success.)
Posted by Eilir at 18:17