Now I remember why

I'm not a big fan of compression stockings. They are hard to get on, harder to get off, get progressively less comfortable throughout the day as swelling gets worse, are hot (and I, like many people, only really swell up with heat), and it feels like the cuffs cut off my circulation at the end of the day. But I did manage to keep them on all day, which is great. The left foot looks mostly normal; the swelling occurred up in the calf where the compression isn't as much as at the ankle. The right foot and ankle is very swollen, but only about 2/3 of what it looked like last night. While my feet and legs are somewhat uncomfortable, I am not in the pain I was last night, and my knee is better. This may mean the New Balances and compression hose are just going to have to be a part of my future, even though it is very hot. But I did get around that somewhat because one of my co-workers has a medium-sized fan that they got her when she was pregnant with her daughter, and she's let me borrow it for now (until she's further along in her current pregnancy). It's under the desk, so when I turn it on, it blows on my feet and legs, where I get hot the most, and by keeping it cooler, I think that helped with the swelling as well.

So now I'm lying on my side on the bed, staring at the computer screen with my head cocked (not great if you have bifocals), with my right foot up on a Euro sham pillow, above my heart.

Since the weekend of training, I have been over at my friends' house or in class until very late, getting home around midnight each night. As a result, I still feel very tired over the training, and so tonight I'm going to try to relax a little bit. I should get into the pool, but frankly it's over 90 degrees out there, and I'd rather be inside with the air conditioning, the fan, etc. I do now have proper sunscreen for the pool, including the sprayable clear type that's good for backs or the part of the hair.

To that end, I'm going to take a short nap, hopefully, without it turning into a longer sleep. But first:

Let me just say that I was very sad to learn of the death of Sir Christopher Lee, who was in over 250 films, and ahd a long and illustrious career. His sonorous voice and thin build usually made him be cast as the bad guy, whether as Count Dooku in Star Wars, Saruman in Lord of the Rings, or any number of monsters in the Hammer horror films, to name a few. But my absolute favourite character of his was Lord Summerisle of The Wicker Man. I love that movie, and his performance was excellent. To be so prolific, for so long, is amazing. He was acting into his nineties, which is remarkable. RIP Christopher Lee. 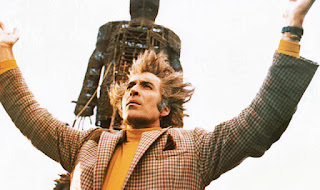