I love birds, and take every opportunity to observe them 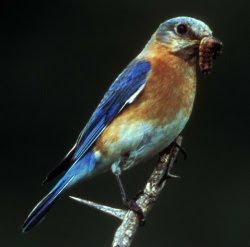 Every morning I have a ritual of sitting on the bus so I can watch the ducks and geese on the reservoir. This morning I couldn't see out of the bus window for the snow and grit, but I did see a hawk flying over the woods near the hospital.

But this afternoon, something wonderful happened. A small bird flew near me and landed in the snow, its bright plumage standing out clearly. It was a bluebird.

I know what they look like, I've seen pictures, drawings, and my family even had a porcelain one my mother china-painted when I was growing up. But despite trips to the farm, being out in the country, and countless bird watching in forty-three years, I have never once seen a real bluebird. For years they declined due to human encroachment upon their environment and myriad introduced predators.  They seem to be making a comeback, though, as evidenced by my sighting in the middle of the city (albeit on a many-acre patch of grass near a stand of woods).

The blue of its feathers was an electric blue, looking almost painted on, and the breast was quite reddish-orange. It was small, delicate, obviously cold, as it was all puffed up. It was absolutely beautiful, a wonderful example of Creation's myriad gifts. Like a colourful flower or butterfly, its plumage was so bright and delicate, even more so as pictured against the white snow. Like other birds, it demonstrated the miracle of flight. And its small, energetic movements demonstrated the activity and wonder of life. I hope the hawk does not find it a tasty meal.

It was quite a lovely experience on a snowy afternoon. I unfortunately couldn't take a picture, as the bus came just then and the bird flew away. But despite having an erratic memory, I think that beautiful blue will remain tucked away for future reference.

For more information on bluebirds and what can be done to help them thrive, check out Bluebird Information and Awareness and the North American Bluebird Society.
Posted by Eilir at 16:32

Email ThisBlogThis!Share to TwitterShare to FacebookShare to Pinterest
Labels: Birds