Does it say something 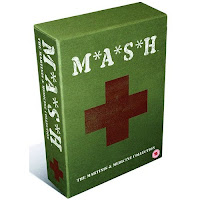 It was my favourite show growing up, and I have all the episodes (and movie) in a collection of DVDs. I even did an acting monologue based on a scene from my favourite episode in junior high, and once dreamt it from titles to credit when we were moving and didn't have access to TV. (At the time my favourite episode, by the way, was the one where Hawkeye was blinded). At least until the end. The finale was one of the most moving things I ever saw on television.
Posted by Eilir at 22:57

Email ThisBlogThis!Share to TwitterShare to FacebookShare to Pinterest
Labels: M*A*S*H