It began with a duck

More precisely, a large female duck swimming in our pool. Those of us who saw her were a bit bemused, although a little concerned that she was drinking the pool water. I had noticed her because I was walking back and forth to the laundry room doing my laundry this morning (see, I didn't manage to get up at an ungodly hour Tuesday, but the more sedate 7 am worked Wednesday).

Anyway, there was the duck. The sky was cloudy, but not remarkable, that is until I got to the bus stop. As I waited, a horribly dark cloud formation crept above us, with strange bands of light and dark. I've never seen the like. It was very eerie. I snapped a somewhat fuzzy picture that still shows you what it looked like: 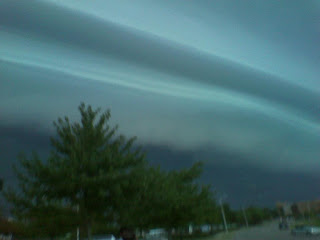 The strangest thing was that I was surrounded by five other people, none of which seemed intrigued by the clouds or darkening sky. They just chatted away. Now in their defence, they were from Africa and South Asia. Maybe they haven't been here long enough to realise that it was weird. Fortunately the bus arrived just as the heavens started to open up.

Unfortunately, I had to get off the bus. The umbrella was nearly useless. Cars were going around something I couldn't see, slowing traffic to a near halt, meaning I had to stand there getting wet longer. I realised when I went home later and they were putting on the finishing touches that one of the grey light poles split and fell into the road. There was a lot of thunder and lightning. I had to take my shoes off and go across the road, walking through about six inches of water there at the corner. I got in, carrying my shoes and umbrella, with a soaked backpack that's still wet in places. All in all, I did pretty well--just my feet and some on my back, and then my entire right sleeve were soaked.

One of the regulars on the bus, a retired Vietnam veteran, was going to ride it back around, thinking it would be a short thundershower. I doubt that helped. I'd looked at my phone and seen the storm coming in from the north; there was a wide band coming from the north that was all red and pink on the radar.

Despite a rocky start to the day, I got quite a bit accomplished. No one was getting off at the same time I was tonight, so I figured I'd be riding the bus home, but I did get a ride when someone went out for food for people in her department. So that worked out nicely.

The most important thing to remember today was to call my mother. It's her birthday. We talked for awhile. She was in Nicholasville; they'd gone out to eat and were at the store loading something into the car. She'd gotten my card and seemed quite happy. I'm glad she had a good birthday. We talked about family for a bit and then signed off. Then I took a 'nap'. Yeah, I know.

Now I have gotten up to take my Lantus, fix a thank you note for a co-worker who was very kind to me during the time-of-no-money (I love having a collection of cards for every occasion), and get ready for tomorrow.

I am thinking it is time to change when I eat at work, as I don't have enough time between breakfast and lunch for my blood sugar to register anything but high. I think if I ate an hour later it would be better.

Okay, I'm going to take my insulin and go to bed. I hope you have a good night. Tomorrow game notes are on the agenda, as I have some stuff to do on Saturday involving re-shelving books (so good to be a personal librarian--must put it on my résumé at some point--I've cared for a collection larger than my own, or the hospital's for about two decades now.) Does it count if you get paid in love and affection?
Posted by Eilir at 00:48