We never know what a difference some small act of kindness can be. A teacher, Brittni Darras, learned that one of her students had been saved while attempting suicide, and wrote her a personal note while she was in the hospital, and it really touched the student, who hadn't thought anyone cared. Because the signs of depression and suicidal thoughts are not always obvious, she then sat down and wrote over a hundred personal, hand-written notes to her various students, giving them a compliment here, or telling a story there, however she connected with each one. What a gift. We can all do small acts of kindness to help others who may be facing very difficult times.

An Amazing Village Designed Just for People with Dementia

I so hope this idea catches on!

At Hogeweyk, the interior of the security perimeter is its own little village—which means that patients can move about as they wish without being in danger.

Each apartment hosts six to eight people, including caretakers—who wear street clothes—and the relationship between the two is unique. Residents help with everything from cooking to cleaning. They can buy whatever they want from the grocery. They can get their hair done or go to a restaurant. It's those basic routines and rituals that can help residents maintain a better quality of living.

Click here for more on the concept of Dementia Villages. As the Gizmodo article points out, 1 in 3 seniors will die with dementia. 1 in 3. It's one of my greatest fears; I watched my great-grandmother decline with Alzheimer's for fifteen years. SHe was lucky; she was able to stay in her home, cared for by her daughter, my grandmother, but at cost--my grandmother outlived her mother by a scant two years, and while the official cause of death was lung cancer, I truly believe she gave all of her stamina and fight up trying to care for her mother, leaving her no reserve for herself. They said my grandfather had dementia, although in his case, I think he just didn't have enough oxygen in his blood, as he had COPD and emphysema for years, and would wander at the hospital with Sundowner's syndrome (when people act strangely after dark in unfamiliar surroundings) without his oxygen on. My grandmother was pretty sharp to a point, but she didn't know my mom all the time, or would fuss over things that weren't real. I already have issues with memory and so I have to admit, I worry about what will happen to me--especially without children or other close family members to care for me, if I should get Alzheimer's or some other form of dementia. But speaking of dementia, if you are dealing with this in a loved one, be sure to read 16 Things I Would Want If I Got Dementia: A heartfelt wish list from a dementia care worker by Rachael Wonderlin, who works with patients with dementia.

Oh, and I don't know who came up with this, but I love it, so I'm going to end this post on a lighter note: 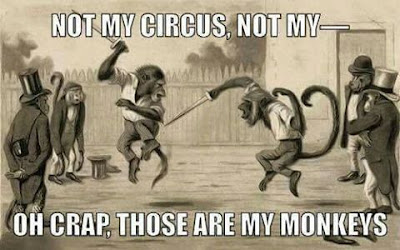 And this hit a chord, maybe because, I don't know, I managed to get hit by a car a few years ago while obeying all laws and walking in the crosswalk with the light:

Okay, I think I'm going to do some reading after I forage for a snack. I'm reading Meghan Telpner's UnDiet: The Shiny, Happy, Vibrant, Gluten-Free, Plant-Based Way To Look Better, Feel Better, And Live Better Each And Every Day!, so I guess it better be a healthy snack. :)
Posted by Eilir at 22:23