No word on the dog yet

but we did come back from the pharmacy to discover the muzzle hanging from the screen door, which probably isn't a good sign. YKWIA said he'd stop by in a couple of days and ask about it, when they've had some time to recover from the shock. He barely slept last night. A lot of people think he's somewhat heartless, but he has a soft spot for animals and kept thinking about how it could have been one of his own, on occasions when there have been breakouts. One dog actually did go out the front door one time behind someone, got out, and disappeared. She wound up several miles away, on Richmond Road, someone found her, and they dropped her off at the night drop-off at the Lexington Humane Society, so they were thankfully reunited. How she managed not to get hit I have no idea, especially as she has border collie markings so is mostly black, and it was night.

I've come home, made some macaroni and cheese with white cheddar shells (which always look like trilobites to me when I see them flattened on a wooden spoon) and some of the beans, which are softer after sitting a couple of days and pretty decent, actually. I' going to prepare and roast some potatoes, onions, and garlic now in a little olive oil with herbs, so I'll have something for later. It's the first time I've used a glass baking dish, so wish me luck--YKWIA once had a very old one just totally explode and crack, and I had just gotten my set of three, so I've been a little reluctant to use them. But I realised I don't actually own a metal baking pan, just a Bundt pan and cookie sheet. That will have to be rectified when I have a little money. Okay, I'm off to cook. 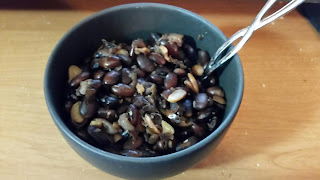