What to do when your tap water contains tiny crustaceans and you keep kosher? 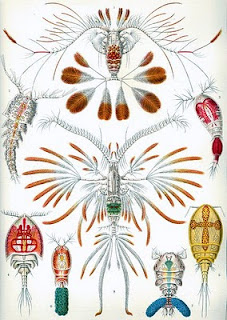 That's the conundrum among New York's observant Jews with the news that tiny crustaceans called copepods have been found in the City's water--crustaceans not being kosher.

Here is the OU [that's the Orthodox Union]'s statement for restaurants and caterers in the City.

You know, I used to work at a bagel shop that when it was originally founded, had New York City water trucked in to cure the bagels before baking. Hmmmm.....

Thanks to Joe.My.God. for this little bit of news.

[PS The illustration to the left is of copepods, but not the tiny ones in the water, which are mostly of the varieties: Diacyclops thomasi, Mesocyclops edax and Skistodiaptomus pygmaeus.]

Personally I'd be getting a filter on my faucet regardless of my religion. :)
Posted by Eilir at 22:10