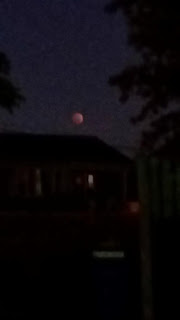 I was helping YKWIA with a few things before I came home and forgot to help him set his DVR for 'American Horror Story' tonight. So of course I remember this after I'm already in the car, with about 9 minutes on the clock to get home in the hopes of setting my own DVR for it. I got in, parked the car at the first available spot, left everything in there, ran into the house (well, as much as I actually 'run'), turned on the TV and cable box, found the channel, and set the DVR, just as it was going into 'viewer discretion advised'. Now it's recording. None of us were up to staying up extra late tonight for it. I called an left a message that I was recording it. They'll have to come over to my house to watch, but oh, well. Of course, maybe he went ahead and set it, I don't know. Of course, I don't know exactly how I feel about this iteration of the popular show. For one, clowns really creep me out. Ordinary clowns. (Which is bad when you work in a children's hospital). I expect 'American Horror Story' clowns will be even more sinister.

Today I took a friend to a doctor's appointment and worked on the notes while he was in there. I'm almost finished with the game notes; I've got about 45 minutes of game play to transcribe, and it's not like I do it 'blow for blow' or anything. So it shouldn't take too long. I would work on it now, but I'm tired (I have been all day, it's like I never slept last night), but I'm relaxing to some of Bastille's music.

So we got back to his house and watched an episode each of 'Fringe' and 'Haven'. Now I'm home and seriously thinking of going to bed. One reason I'm sleepy is that I got up early to watch the eclipse. I even got a not-so-great picture (I've never had a camera that could do justice to the moon), showing the red shadow of the lunar eclipse. I was one of the lucky ones who were in the area experiencing a selenelion. The arrangement and trees were such that I couldn't see the moon and sun at exactly the same moment and position; but if I moved a pace back and forth, I could see each within a few seconds of one another. It was fun.

Hi there, I'm Lindsey! I have a question and would love to speak with you. Please email me when you have a chance, thanks so much! Looking forward to hearing from you.