I opened up some salad I'd gotten a couple of days ago, and the lettuce is icky and soggy. I managed to save the cranberries, walnuts, balsamic vinaigrette, and feta cheese that was in a separate compartment, Oh well, tortillas and cheese for dinner it is.

This morning I went to work, then over to my podiatrist to pick up my new shoes and inserts. I had quite some trouble getting them on, and at first we thought they were too narrow, but they do actually fit. I just have trouble bending my right knee fully in a chair (I put my shoes on by putting my feet up on the bed). I took them back off at the doctor's office, and then put them back on after I got back to work, as it's carpeted, and I can't return them if I wear them outside at all. They're kind of boots, or hightop athletic shoes, with an athletic-style shoe in black that comes up on the ankles for full support. I thought they'd be better then my lower New Balances this winter for walking on uneven snow. They're are the brand Answer2, which I hadn't heard of before, style 442-1. They're made by Apis. They also gave me several Sure-Fit inserts, which I'm supposed to change ever four months or so, and there were a couple of thin ones that go under the regular inserts to help raise the foot if needed to keep it from slipping up and down. I have a slight discrepancy between my left and right leg in terms of length, so I have that secondary insert under the right one but not one on the left, and they were doing pretty well this afternoon. The inserts are a little different than the diabetic orthotics I have in my regular shoes, though. They were much easier to get on the second and third times I tried. I'll have to keep a weather eye on my feet, though, and look for any rubbing, etc. But I think they'll be a decent fit after all. I do need longer laces for them. Even my New Balances that I got last year have boot laces in them. I have such a wide foot (I wear a 7 2E in the New Balances, XW in these shoes), that I need longer laces than they ever include. I really do appreciate that my health insurance will pay for these as part of my diabetes care. I had the same type of New Balances several years ago that were $115 when I paid for them myself. These go for about $135 online. They look like this: 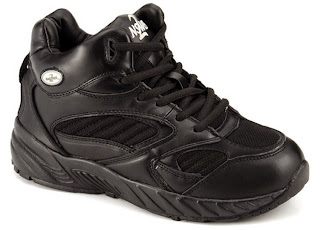 The nice thing is that they work under my pants for work pretty well, and I noticed they seem to be This afternoon, after work, I: Now I'm home, listening to 'Somebody That I Used to Know' by Gotye (featuring Kimbra) on the radio, have the windows open and the fan in the living room blowing on me, and I'm finishing up dinner. The plan for tonight is: I'm hoping by having the fan out here in the living area rather than the bedroom, I won't just go in there and lie down.
Posted by Eilir at 18:01