It's hard to believe 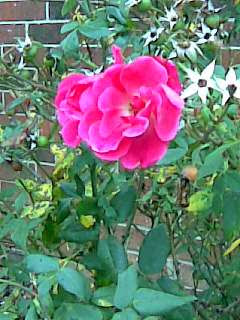 that Autumn is almost over. The holiday season has started; December is just around the corner, and after that, a new year. Time seems to go by so much faster as you get older. I remember summer vacations seeming to last so long. Now summer passes in the blink of an eye. I suspect it only gets worse as you age.

The picture here is of a gingko leaf. There are lots of gingkos in Lexington because Henry Clay, the famous 19th century politician, had them brought over from China, or so I've heard. I think the trees are beautiful, but the female gingko's fruit smells horrible, and it's especially treacherous to walk on a sidewalk littered by them.

I also took a picture of the last roses of the year, which believe it or not are still blooming, although they've already grown large hips, too. I have no earthly idea why they came out different sizes; they were both taken with my phone.  Anyway, I thought I'd post them here.
Posted by Eilir at 22:57