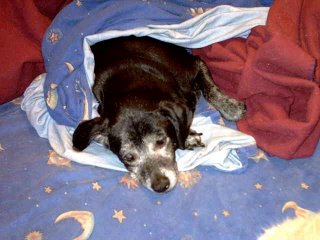 It's nice to sit down after a shift at the gas station. My feet are doing much better, of course, but towards the end of things pretty much everything hurts a bit. I could really use the massage cushion I got John for Christmas. :)

We had some excitement today. Someone drove into the store. Well, not completely, but enough to break a door and window. Apparently he thought it was in reverse and it was in drive and he stepped on the gas, and well, the rest is history. I wasn't there when it happened, thankfully. It probably would have scared the bejeesus out of me.

Since my register is the one on the side that was being repaired, I did a lot of stocking and not a lot of business until the last couple of hours of the shift. That wasn't so bad. Plus, I got to tell a customer to put out his cigarette whilst he was pumping the fuel.

But oh, it's good to be home. I've eaten a couple of peanut butter sandwiches and hugged my dog and taken her out, and now I think I'll chill out until it's time to pick a friend up from work.

Speaking of Cerys, I took this picture earlier today of her lounging on the bed. Doesn't she look sweet?
Posted by Eilir at 22:53