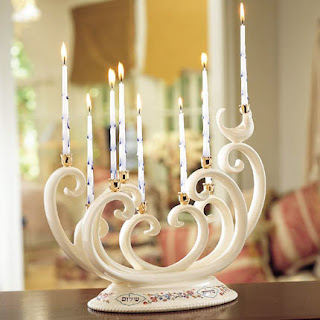 Tonight marks the beginning of Chanukah, a minor Jewish holiday that celebrates the consecration of the Second Temple in Jerusalem after it was violated by the forces of Antiochus IV Epiphanes, the King of Syria, during the 2nd century of the Common Era. It can be summed up by a statement I read in Reader's Digest by Anna Powell, in her 'Eight Gentile Reminders': 'They tried to kill us. We won. Let's eat.'

The Chanukiah in this post (or 9-branch Chanukah menorah) is a limited edition Lenox china that is absolutely beautiful (although very fragile, so perhaps not to be around little ones). I found it at the J Levine website for $199, if you're interested.

I spent Thursday running errands and Chanukah shopping, since I have a close friend who is Jewish. On Monday I'm going to cook him both potato and cheese latkes (if you haven't had the cheese ones, they're wonderful. Who knew fried cottage/farmer's cheese would be great?)

Email ThisBlogThis!Share to TwitterShare to FacebookShare to Pinterest
Labels: Chanukah