25 years ago, and it still feels just as raw 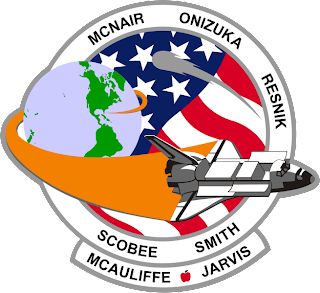 I was 19 years old, dating someone who at the time was obsessed with space exploration and was studying computers with the hope of working for NASA. One of his friends came up to us in the student centre at the University of Kentucky and said that it had blown up. We didn't believe him, thought he was making a very unfunny joke, but there the evidence was in the TV lounge. We stayed there maybe three or four hours, watching it disintegrate over and over, in shock. I remember my boyfriend pointed at a spot on the screen and explained that it was the crew cabin. He insisted that they were alive at that point. From everything that came later, he was right.

So every year at this time, I still pause to remember them. Every moment, every single time (and there were many, as I worked) that I wrote '1/28', I remembered. I remembered the images of hope, and exploration, and tragedy. And I remembered the men and women who lost their lives reaching for space.

The following is a tribute I found someone had put online that really touched me. It has music from a band I loved at the time (Mr. Mister) and I found myself back in that TV lounge, watching the screen in disbelief. My boyfriend gave up his dream. Something shattered in him that day, or died. I'm glad others didn't give up. I'm glad there are education centres that are set up in memory of the crew. I actually have a friend who is an engineer at NASA, and I think she has one of the coolest jobs on the planet.

Other tragedies have come and gone--another shuttle lost, the horror of 9/11, but this the first for me, the first shocked moment akin to my parents on the day Kennedy died. A moment when you feel overtaken by history stays with you for your entire life. This was what it was like for me.

Requiescant in pace. May they rest in peace.
Posted by Eilir at 19:50