I had my first attempt to use the dough setting on my machine, followed by punching it down, one more knead by hand, my first try at braiding, brushing with an egg mixture, and baking for 25 minutes. The first picture is the braided dough before baking, the second is the final result. It was a recipe that did the two loaves I needed at once. I'm really looking forward to tasting it tomorrow. I even put a few sesame seeds on top to be fancy. 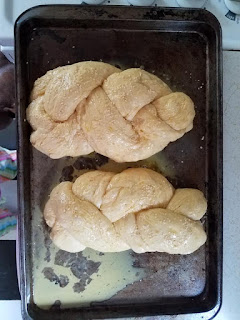 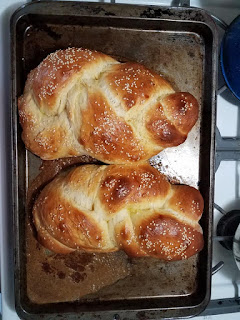 The bread was my crowning achievement for the day, along with getting in some information on a website in a timely fashion. Otherwise, I managed to 1) forget to take any of my medicine, oral or injected, 2) had my blood sugar fly up to the 340s as a result, 3) received a kitchen timer in the mail that didn't work per the instructions so rather than just returning it I unscrewed and fiddled with it most of the day, figuring out how to put it back together but unable physically to do so, and getting mightily frustrated, to the point where I just threw it away, since I couldn't return it, 3) slept most of the rest of the day, 4) had a recurring anxiety dream which began with Dungeons & Dragons (which oddly enough, as a gamer, I've never played) in the Patterson Office Tower at the University of Kentucky, and ended with a full-out musical number with Nancy Drew in that location.
I get a little off when my medicine's off. The dream was my anxiety, I was more frustrated than normal, my blood sugar was affecting my thinking and in general, I was both anxious and depressed.
But I made good bread, so that's going to be my takeaway. In the meantime I've taken all the meds I can at night (ADHD and water pill/potassium are the exceptions, as they're a morning thing). I've also had a bit too much caffeine today, and it's late, 1:35 am and I'm both tired and awake. I watched some 'Designing Women' with my roommate just now, though, so I feel a little better.
That timer was sort of a metaphor of my day. Non-operational, then wound too tightly, and you take me apart and the spring explodes and you lose the screws.
Posted by Eilir at 01:44