First, I got my test results by 8 pm tonight, which was pretty speedy, and yes, I am negative, but of course, that just means right now.  Still, it will help going forward at work.

Second, while I was at Kroger this morning I looked at their plants.  You see, we have a hook next to the front door and last year midway through the season I got some impatiens that did well in the morning sun.  Granted, I've only looked at plants at the grocery because I was out making essential trips, but I haven't seen any impatiens or other part-sun/part-shade plants.  Everything has been petunias or geraniums or the like.  So today I saw a Fuschia plant tucked in with everything else, a type I hadn't seen before. I don't have a great deal of luck with them, as I've tried twice and gotten whiteflies each time, but also tried to raise them as a houseplant rather than outdoors.  I decided to give it a shot, especially as they were $17 for a very decent size.

Here is the plant in its place by the door, both the whole hanging plant and a close-up.  These are more slender and elongated than some I've seen, and it's more the bushy rather than trailing sort, which I thought odd in a hanging plant, but oh, well.  As a plus, they're not toxic to animals as near as I can discover--they're not on the ASPCA list at all, for example. 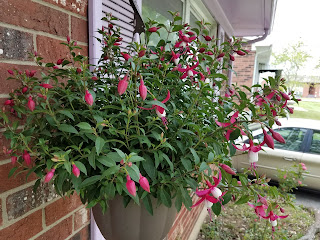