Got everything set up

It's hard to see in these pictures, that this is a full-sized bed, but the 'headboard' and 'footboard' are on the long ends of the bed. The coloured inserts can be changed, or even contain photos with a clear insert over them. Since my friend's living room is pink, I changed them to pink, even though I prefer the lavender ones. I wanted storage and so this seemed a good plan. I guess I assumed the mattress would be recessed more - it's pretty tall. Only the cat seemed interested in claiming it - I think the dogs were afraid of it, or at least one of them was. All the animals were upset about all the furniture moving and strangers coming in to set it up. I hope this will bear my weight okay; it's quite different than the way the similar bed at the store was constructed underneath. There is a bunkie board to help distribute the weight, at least, but underneath there are boards above a cruciform support of perpendicular particle board.
But all in all, it went well. At one point they had a piece upside down and had to change it around, but they still did better than I would have. The guys forgot to put the lower knobs on the nightstands, so I did, and I changed the inserts, even though the lower ones on the footboard meant getting down in the hardwood floor. The workmen spoke a language I couldn't quite identify. Some words sounded Spanish, but it definitely was not that. Maybe Portuguese? It's possible that are Brazilian.
YKWIA seemed to be disturbed by the intrusion of his peaceful home by the bed and what it meant - that we were really moving in together. It will be an adjustment for each of us.
Anyway, it's together and I put the mattress cover and bedclothes on. Now I'm home and I need to work on the game notes tonight, or pack, either one. But I did do a lot today, cleaning and moving things, and really want to just relax. It's hard to believe it's only Friday night - it's felt like a Saturday all day. But tomorrow I have to take YKWIA to an appointment, but otherwise I think game notes and packing are a priority. I don't have a lot of time before I move, and it will go by very fast. 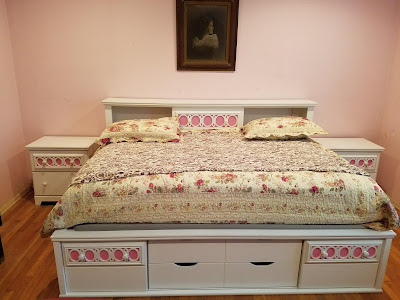 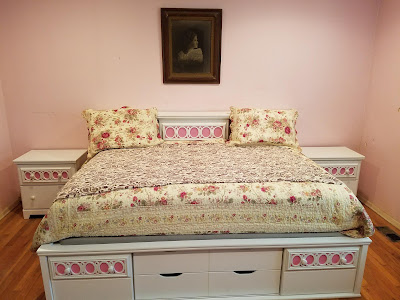