I'm pooped, and it isn't even game time


Yesterday I cleaned a very dirty shelf with magazines and did YKWIA's laundry, and that was enough to make my back hurt quite a bit, so I laid down for awhile while he helped a friend out at his house who is battling cancer.  They called me to go get Subway and we all ate and visited, then we got home about 8:30 pm.  I think we were both done in by midnight (he's been over several days in a row and took the bus out Friday, getting lost on the walk over there, and probably walked four miles back and forth until he found it), and we .were up by 7:30 am.  I have no real reason to be as tired as I've felt lately.  I've done some housework and of course, I worked at the medical centre, but still, I'm just tired all the time.  I've been up doing my stuff and listening to shows he's watching (he finished the 'Almost Human' DVDs and we watched a couple of episodes of 'Up the Women'.  I unplugged my tablet, which has been on the charger for two days and really needed to be unplugged and just turned off.  He's got a lot of documents to transfer to it and we're going to see if there's enough room once I cleaned my stuff off of the microSD card.  There's not much on it, now, just some basic applications and one from Adobe for reading PDFs and one for reading Word files.  That should suffice for him.  I haven't used my old tablet for some time.  I'm not sure it'll have the processing speed he'll need, but it's worth a try since neither of us can afford a newer tablet or laptop right now.

Today I'm looking forward to the game.  I'm kind of grungy and should go ahead and take a shower, but I'm just not up to it.  I'd like to lie down for awhile, but the bed hasn't been made yet.   I just feel a mess today.

My strawberry plant that Brenda gave me is back outside after being brought in for a frost advisory last night, and it has two ripe strawberries and one that is turning on it.  I have lost three smallish African violets recently, including the two pink ones in the bathroom and a purple one in the bedroom.  I'm not sure what happened; they got puny and I tried to save them, but it was a no go.  On the other hand, one of the orchids has grown a new leaf and I have two that are getting ready to re-bloom.  Maybe orchids are more my thing, although I've had no problem with violets before.  The window seat in YKWIA's room is lush with shamrocks, an umbrella tree I just repotted, dumb cane, and philodendrons.  They love that window: 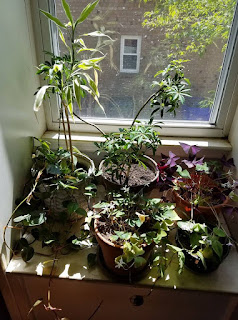 So overall, the plants are doing well.  Also, the orchid at work is putting out new shoots and buds.  I separated the stems out to give them more room: 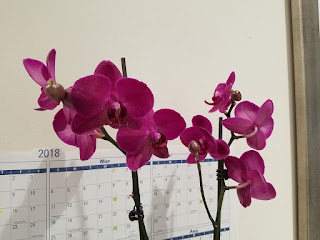 It's the same colour as part of my mousepad, my pen holder, and my water cup, so it's coordinated to the checkout bay. :)  What can I say, I like it when things match.

Okay, I'm going to go check on the last of the laundry.  I realised I started the bread while still running the dryer (the bread machine is on the washer, as that's a good place for it usually when I'm not washing, as it has a tendency to 'walk' as it mixes, which is apparently supposed to happen, according to the manual.  But the vibration isn't good for rising bread.  I don't want to mess up this loaf.  I'm experimenting with all-purpose rather than bread flour, as I'm low on the other.  But the other day I forgot to put the yeast in until 30 minutes into the cycle.  While it was edible and looked fine, it was chewier than usual.  I can't believe I did that.  I was washing dishes and remembered suddenly, doing what I could to fix things.  It wasn't bad, but not ideal.  Hopefully, this one will come out fine; I definitely put all the ingredients in. :)