Have you looked at Google Arts & Culture, the mobile application?

When I first downloaded it, I was enchanted by the window it represents into the art world, as you can enjoy art from museums all over the world.  Living in a city that is about 300,000, we don't get a lot of fine art masterpieces come through locally (although there is the UK Art Museum, which has lovely exhibits, and the Headley-Whitney Museum, among others, which has fine pieces of jewellery and other objects there, among others).

Then in January, Google came out with a feature of the application that allowed the user to take a self-portrait (aka 'selfie') of him- or herself and 'match' it to a piece of artwork in the database.  It is a cool feature.  It was, however, regionally-locked, and much of America and most other countries couldn't actually access it.  Not only that, there was no explanation--it just didn't appear unless you were in a region that it worked in.  After some time of frustration, I finally found a news story that explained it, after I'd looked all the way through the application in vain.  I was not alone.  Thousands of negative reviews in Google Play ensued.  It's a fine application in and of itself, but the tantalising feature got dangled generally on the Internet and many found they could not begin to play with it, sometimes because they lived a mile from someone who could.

Fast forward to March.  The other night, I was getting ready to sleep and was in bed, in the dark, and happened to go onto the application to discover that the feature was there.  But of course, I couldn't take the self-portrait without getting up and turning on the light.  [You can't use an existing picture; it has to be taken by the camera right then, and then you can use Google's facial recognition processing to search.]  So I thought, well, next time I think about it, I'll try it.

Last night, before bed, I tried, and couldn't find the feature again.  So there was frustration again.  Then I tried to think what had been different the other day, and the answer was that I wasn't on the data plan; I was on the house WiFi, something I hadn't had back in January.  I went on the WiFi, tried again, and it actually showed up.  And this was the first result (you can try different ones, and it gives you the percentage matched): 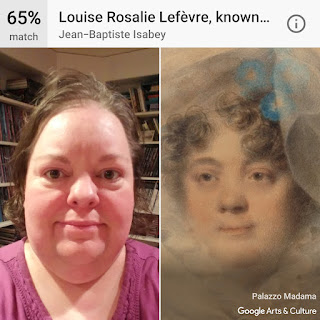 Ignore the fact that my hair is sticking up (I had just gotten back out of bed and taken my CPAP masque off).  The nose and eyes and chin are pretty decent.  So I decided to learn more about both the artist (Jean-Baptiste Isabey), who was born almost exactly 200 years before I, and his subject  Louise Rosalie Lebfèvre, an actress and singer from the time.

This is the full portrait: 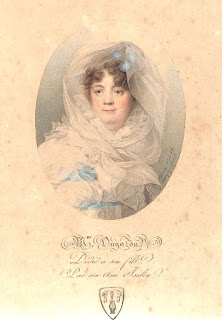 And here is a portrait of the artist and his daughter by fellow artist  François Gérard : 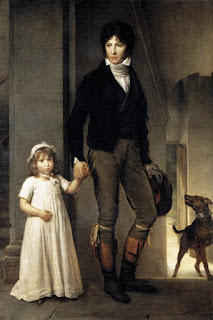 Anyway, it was fun.  I would suggest trying different forms of connecting to see if you can use it if you are regionally-locked otherwise.  I use a VPN for security and some say that helps, but for me, it was going on my local WiFi rather than the cell service.  Google has a webpage for the application and the self-portrait feature at which you can learn more, with a link to getting the application, whether on Android or iOS.

Okay, I've finished getting ready for the game and rested.  Time to get a shower before Brenda gets here.  Have a great day.