I had a great Thanksgiving

It was a lot of work. I think we had about ten dishes overall: the Quorn 'turkey' (made from mycoprotien/fungous/mushrooms), rolls, gougers (this time with Bleu cheese), butternut squash with Gruyère cheese, curried pumpkin soup (also made with butternut squash, so much easier to peel than the kabocha was a few years ago), mashed potatoes (of course), green beans with shallots, Brussels sprouts with chestnuts, homemade cranberry and sauce with red wine, and pumpkin/caramel pie (the latter two were cooked/baked on Wednesday night). The pied took a while to come out and cool, so we were up late then, and got a late start on Thanksgiving, starting the preparation and cooking about 12:30 in the afternoon. We ate around 5:30 pm. I think it was the best Thanksgiving we've ever done. Afterwards, I cleaned up (that was a task), and he put everything into containers and into the fridge because he's good at spatial relations and can damn near bend space, if not time. Here are some photos: 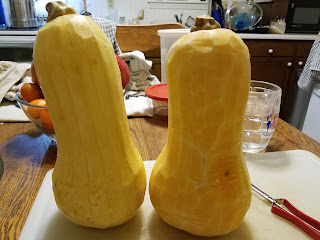 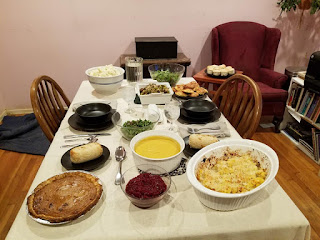 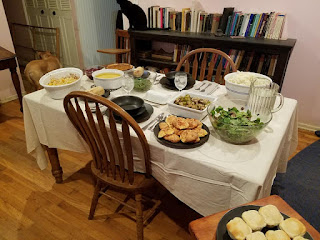 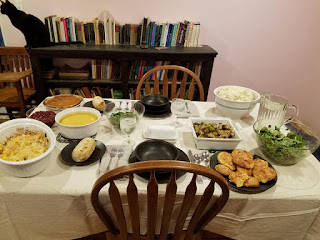 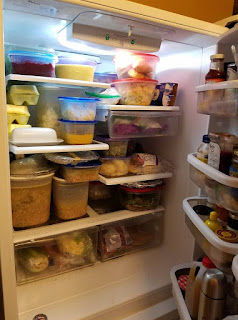 We were both asleep by 8 pm, although I did wake up and woke him up at 11 so we both could take our medicine. We weren't up very long, though.

I slept well, and was able to sleep in till about 9 am or so as I'm off today. I'm actually off till Tuesday, as I have a funeral to go to, for the mother of a friend, the latter of whom had adopted me like a granddaughter. She'd just had her 94th birthday, and was a lovely woman with a huge personality that just lit up the room. I'll miss her a lot. The visitation is Sunday night so we won't be playing the game. I'm going to take my roommate early so he can help our friend (who has cancer) during the family visitation.

But today is a relaxation day. We'll take our friend some food. I'll stop by the storage unit and finally put my summer clothes in it [they were in my room for a good long while, and then the car]. I need to go by the library and take back The Rabbit-Proof Fence by Doris Pilkington, which I have out from interlibrary loan, now that I finished it this morning. I'm also going to take back some CDs, and Imagine Dragons one and one by OneRepublic. I plan on starting The Distant Hours by Kate Morton, which YKWIA had checked out and said was excellent, so I wanted to give it a try.

I guess that's all for now.  I plan on getting some rest before going back to work.  Days off are rare.
Posted by Eilir at 12:05