It's been an eventful evening. We went to the local pound, found out they were closed, but that many of the animals up for adoption had been moved for an event to PetSmart, including the kitten my friend had his eye on. Went to PetSmart, started the adoption process when two women who were workers of either the society or the store were attacked by an over-excited, overstimulated dog and had to be taken to the hospital. [One was trying not to go, but my friend convinced her to do so, as she was bleeding more than she realised and it was her thigh.]

They shut down everything to deal with the crisis, but because he'd started the adoption, my friend was allowed to take the kitten home. What we have discovered is that the kitten is a master at hiding, and actually vanished while we were both looking at him, and is now nowhere to be found. So we now have a ninja cat with vanishing or teleportation powers in the house. Here's hoping that the women will be okay, the dog isn't just put down, as he apparently has never shown any aggression and it was really noisy and just got him overwrought, I think. Here's hoping that the kitten reappears. He's a little wary of the dog in our home, who hasn't seemed to really notice him yet; she just wants my friend to let her on the bed, and she's not supposed to be on it except at bedtime. Meanwhile, the cat has hissed and hidden a little, too, and I'm not sure he's really thrilled by the interloper. But hopefully, everyone will warm up to each other. Meanwhile, while the dog and cat I have been living with do not bother my allergies so much, I have discovered PetSmart, with the concentration of animals, made me regret not having my inhaler with me. But I did okay. It was just a weird night, and I like I said, I hope the ladies are okay. I didn't actually witness it, just the scene right before and after, but my friend gave a witness statement. All the workers were obviously rattled by the whole thing, understandably.

It's good that I have an appointment next week, as I have parking at work. Turns out nearly all of the plants in this window--no, all of them, are toxic to cats. The adult cat has never bothered them. We're not sure how the kitten will deal with them. So I'll put them all outside for now and take them to work next week...fortunately African violets, orchids, and Christmas cacti are all safe, so there will still be plants in the house. 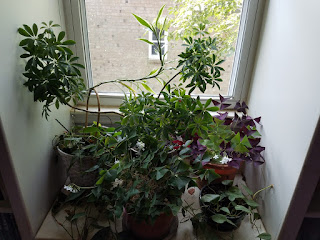 Apparently the hiding place of choice is under and behind an antique marble washstand. We turned out the lights to go to bed and a tiny meow or two issued forth. I guess the dark scared him. He's only about ten weeks old.

Flash forward to now. I haven't seen him this morning. My friend said he cuddled with him, slept on the bed, didn't even seem to mind the dog and vice versa (she's been trained to keep her distance by the other cat, although she forgets, so she has little scars on her nose from their training sessions), and then this morning the big cat came in the room and the kitten moved quickly off the bed and has been hidden since, although my friend heard a couple of meows later. We're reasonably certain he's still in the bedroom, and the big cat is on my bed in the other room. We're hoping he comes out to eat and use the litterbox soon. We could tell he was a little shy in the cage at the store, but he also ate well and played with the other cats and snuggled up with them, too. It's just the big cat doesn't know what to make of the interloper, and the little cat is aware that he's not being welcomed with open paws just now, anyway. :)

PS There are approximately 4,000 books in this house and various antiques and cubbyholes to hide in. I suspect it will be a long week.
Posted by Eilir at 10:42